Chidera Anyanwu was six years old when her family moved to the United States from Southern Nigeria, but she still has vivid memories of her childhood in Owerri, including visits to her ancestors’ village and the delicious food that she ate there.

“We used to go back to our village, where our ancestors lived and died. When you’re at the village, you see all the old aunties on the side of the road that are making different things — puff-puff, akara and other Nigerian delicacies, almost like street food,” Anyawu recalled this week.

Puff-puffs, slightly sweet, deep-fried pastries shaped into balls, were a favorite treat for Anyanwu, and when her family left Nigeria, her mother made them regularly for her and her four siblings.

“She would try to keep that sense of our culture,” Anyanwu said, “A big way to stay connected was through food.”

Traditionally, puff-puffs are made with five ingredients (flour, yeast, water, sugar and salt); six, if you include the vegetable oil they’re deep-fried in, but Anyanwu said there’s a lot more that goes into mixing the ingredients together and frying them in oil.

“There’s more of an art to making puffs than people realize,” Anyanwu said. “Trust me, it took my mom years to figure out how to perfectly make them.”

Puff-puffs can be enjoyed as snacks or as a side with savory meals. They often make appearances at parties. Anyanwu said, you’ll regularly see them at Nigerian weddings and other celebratory events.

Using her mother’s base, but adding her own twist (“mine are lighter than hers”), Anyanwu started making puff-puffs for friends’ parties. Diverging from tradition, she made variations with gooey caramel or creamy Nutella piped inside, rolled in cinnamon-sugar, or dusted with powdered sugar. She started getting enough requests for her puff-puffs that, this April, Anyanwu decided to officially start Gourmet Puff.

For now, Gourmet Puff is a side business for Anyanwu, who spends the rest of her day as a trademark, copyright and advertising lawyer. Her law job is pretty flexible, meaning, she can break up her hours between mornings and evenings, leaving afternoons free for baking and delivery of her products. Anyanwu makes the pastries at her Oakland home’s kitchen, which is licensed for a cottage food operation. With Gourmet Puff just two months’ old, Anyawu and her husband, Bayo, do all the deliveries, but she said she will soon have DoorDash and Grubhub fulfilling orders.

Anyanwu said she plans to offer more flavors over time including savory puff-puffs stuffed with Nigerian red stew and efo (stewed spinach). As far as she knows, Gourmet Puff is the only local business specializing primarily in puff-puffs.

Last year, Anyanwu and her husband moved to Oakland from Washington, D.C., where there is a larger African community, and consequently, more pan-African food options. Oakland, in comparison, has a sparse selection, with only one Nigerian restaurant — Ruth’s Buka (the other, Miliki, recently closed). Anyanwu said she saw an opportunity to introduce her new community to her culture through puff-puffs, something that most Nigerian restaurants serve, but mostly as a side. Anyanwu feels they deserve a moment in the spotlight.

“Puff-puffs are treated like the stepchild of the meal,” she said. “They should be the meal, the highlight.”

Because they’re still not well-known among non-Africans, Anyanwu said one of the hardest parts of running Gourmet Puff is describing what puff-puffs are to those who’ve never had them before. She said some people have compared them to mochi, because of their chewy texture, and, because they’re deep-fried dough balls and look the part, there’s a tendency to compare puff-puffs to donuts – but Anyanwu doesn’t agree.

“I’m not a fan of donuts,” Anyawu said. “Donuts taste like sugar air, they don’t have the substance I want.” 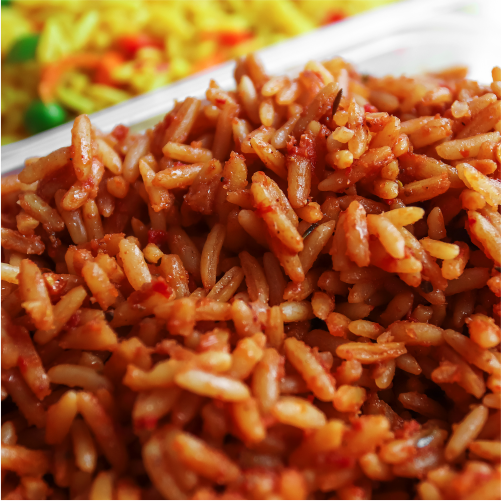 This beloved West African rice dish has long kicked up lively debate, so we asked the experts. This seemingly simple question is a loaded one – the beloved West African staple has caused diplomatic incidents (Nigeria’s culture minister was accused of betraying his country’s cuisine in 2017 after reportedly saying Senegal’s was the best jollof) and famously got Jamie Oliver...